mother of the world

Cairo is known as “Um al-dunia” – mother of the world. It’s not hard to realize why. Cairenes inhabit a space present in millennia of literature. They live amongst the pyramids, the only remaining ancient wonder of the world. Glorious empires sustained themselves on the riches of the fertile Nile valley, a sliver of abundance on a map of hostile sand. Cairo served as a metropolis of learning and culture, the seat of empires, and today, is home for anywhere from 20 to 30 million people, depending on who you ask, depending on the time of day. I’ve heard 5 million people enter each day as they commute to work.

The city doesn’t sleep. While there, we got swallowed up in the excitement, and often crashed well after the sun had risen. When crossing the road, I can’t tell if it’s better to do so with your eyes open or closed. You literally have to walk into oncoming traffic if you ever hope to cross. The pedestrian crossing lights show a little green man running for his life. Amazingly enough, Cairo has a metro system. You need to position yourself in the middle of a wave of people, and shove your way onto the car. The smog is so thick it soon forms a blanket on your tongue.

You marvel at boys on bikes balancing bags of bread on their heads weaving in and out of traffic, a whole lane dedicated to pedestrians who spilled over from the sidewalks, fancy cars rubbing bumpers with old beaters, and the occasional pack animal, all streaming along together. Horns are such that you only really notice them when they’re not there, maybe at 4am. You can buy dirt cheap meat sandwiches on the street while marveling at the zillions dollar hotel just beside you.

I think her name needs to be changed. Cairo pops out of her armchair at the first suggestion of fun, ready to put you in her station wagon and take you to the zoo, or the museum, or out to the desert. She knits you scarves and lives a little more modest than you. You respect her, and maybe even fear her, but she’s got a photo album that suggests she’s been around the block in her day. She’s proud and fearless. Cairo is your chain-smoking grandmother who drinks too much coffee and pinches your cheeks too hard before slathering your face with kisses. “Why haven’t ya been around to see me sooner?!”

For being so busy, Cairo also knows how to slow it down and keep it personal. Almost every corner shop offers up coffee and shisha, where those with jobs take long breaks among those not similarly encumbered / lucky, spend hours reading newspapers, shooting the shit, watching television and the hustle shuffle by. Five am still truckin’, we head to a favorite, only to move on to the next. “At capacity,” said Bunduq.

So we rode horses to the pyramids. Where are they? I asked. Nobody was quite sure what direction to point in. It was really, really late. The dust was really thick. We were privileged to be at a human oasis somewhere between Giza and the open desert, where hundreds of men plus Cate and Sarah had taken to partying the day before the first day of the Festival of Sacrifice. Bonfires tickled the sky, tea was served from dusty platters, little guide-boys managed dozens of horses and camels as we wandered around the party. There was a hash tent from which dozens of satisfied stony gazes watched those dancing around the fire. Cars competed to out blast one another with the latest in funky, gritty Egyptian electronica. “Those cars way out there,” Bunduq explained, “Are where you take your girlfriend if you’re lucky enough to get her away from the house for a night.”

We ate dinner in old castles, we wandered ancient marketplaces. I didn’t buy any trinkets. I don’t buy things anymore. Pack lightly. Don’t forget your manners. Avoid trinkets. Drink water, don’t die. These are the simple rules I live by, and they’ve served me well so far. For my 9 days in Egypt, I lived out of a day backpack, one you might send your sixth grader to school with. I didn’t pack socks, I washed my underwear in the sink.

We took a 15 hour train ride to the south, former capitals of ancient empires, Aswan, Luxor (Thebes). We saw the sites: The Valley of the Kings, The Valley of the Queens, Hatschepsut’s Temple, The Colossi, Karnak Temple, Luxor Temple. Took a felucca ride on the Nile. I saw King Tut. I read a ton of books about King Tut when I was little. When I was little I used to want to be a paleontologist, or an archaeologist. I wanted to be the next Howard Carter, and discover something glorious. “You can’t even spell archaeologist,” my parents would marvel, “Let alone know that you want to be one at 9 years old!” I created a picture book in third grade entitled, “An Archaeologist’s Dream.” Then I used to say, when I’m an Egyptologist, I’m going to have to learn the Egyptian language. Speaking as such, I imagined the billboards in modern day Egypt bore the same hieroglyphs I saw in my books. I think I had the revelation in 2nd year Arabic at Stanford that this childhood declaration of mine had come to fruition. I am learning the language of Egypt, albeit not as a paleontologist-to-be. Why I’m learning Arabic, I believe, will become clear in the years to come, if it indeed has a purpose in my future. For now, I’m content with study for the sake of study.

Seeing these ancient sites in person, after the ten-year-old me had dreamt thousands of dreams about them, completed one of the loops of my life. I don’t think I can say much more about them. They are fantastic. Imagine! They were created thousands of years ago, and have stood the test of time. We rode camels. We saw more old stuff than I can keep tabs of. We saw the villages hugging the Nile the entire length of the river, from Cairo to Aswan. I saw Egypt, and it was great. But deeper than that, I feel like a chapter in my life is finally complete, the last plot elements finally written in. I am grateful. I feel mushy and cliché but I wonder what other visions of mine, childhood or otherwise, will come to be. 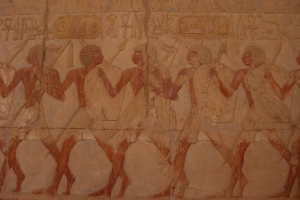 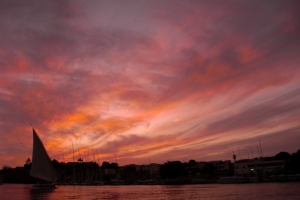 Felucca ride on the Nile -- Aswan

a guide hamming it up for the camera 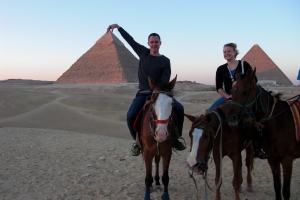 brett i swear this is not photoshopped.

Check out all my photos from Egypt here.

3 responses to “mother of the world”